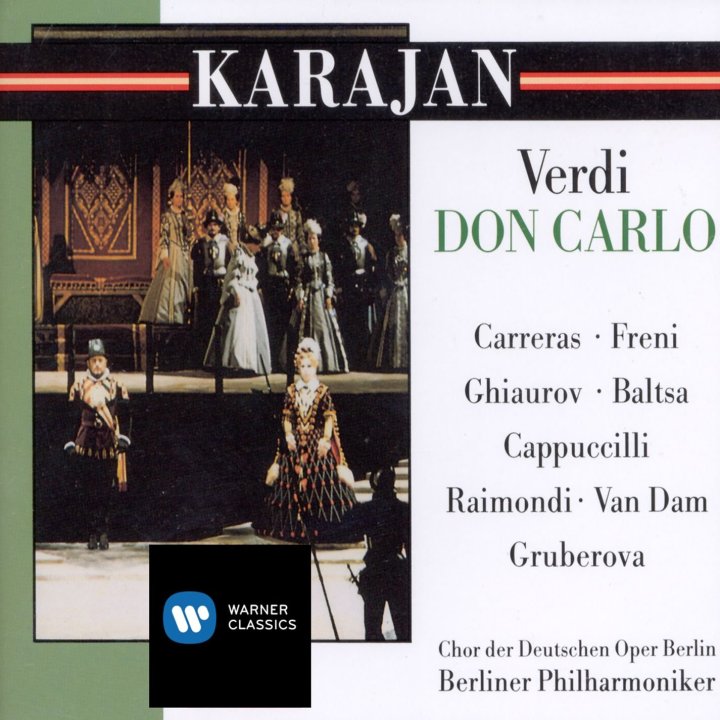 This is an infuriating set. Infuriating because the performance is so good but let down by the ridiculously wide dynamic of the recording. The balances are all over the place too, with the brass thrust relentlessly into the foreground. One particularly bad example is at the beginning of the garden scene (Act II, scene i in this version). Carreras is placed so far away from the microphone at his entrance that you can hardly hear him. The natural reaction is to turn up the sound, only to be blasted out of your seat at the next orchestral tutti. With the sound at a reasonably comfortable volume for the rest of the scene the brass reiteration of the friendship theme at the end is absolutely deafening. It might be ok if you live in the middle of nowhere, but if, like me, you live in a small flat in the heart of London, it makes listening a very nerve-racking experience, as you have to be prepared to adjust the volume all the time. It’s no better with headphones either, as, with the sound turned up high enough for the quieter sections, you risk severe ear damage every time the full orchestra let fly.

Aside from the problems of the sound, though, the set has much to commend it. I regret the absence of the Fontainebleau act, as Karajan conducts here Verdi’s 1884 revision, which excised the first act and moved Carlo’s Io la vidi to the monastery scene, which now became Act I. This was the version usually adopted until Giulini included the Fontainebleau act in the famous Visconti/Covent Garden production of 1958. Since then the opera has been performed in a bewildering variety of different versions, but the four act version is rarely given these days, though, as far as I’m aware, Karajan always stuck to it.

Editions aside, this one has an excellent cast. Freni is captured at the beginning of her progress into more dramatic music. In 1977 she had been a superb Amelia in the Abbado/Strehler production of Simon Boccanegra, and the role of Elisabetta suits her very well. She doesn’t quite command the beauty of tone of Caballé on the Giulini recording and she occasionally sounds a little cautious, but she makes a most sympathetic heroine, and articulates the text beautifully. Carreras is caught at his absolute best. Some might feel that, as with Freni, a larger, more heroic voice is what is required, but I’m not sure I’d agree. Carlo is one of Verdi’s most complex tenor roles, a weak character stunted by his father’s indifference to him, constantly in the shadow of his noble friend, Posa and Carreras brilliantly captures both his instability and his desperation. He might just be my favourite Carlo on disc. Cappuccilli is not so interesting a Posa as Gobbi or Milnes, nor is he quite as impressive here as he was in the Abbado Simon Boccanegra, but it is still an excellent performance, his breath control and legato very impressive. Ghiaurov is now sounding a little grey of voice, but that is not inapt for Filippo, and he too presents a believably complex character. I prefer a blacker voice than Raimondi’s for the Inquisitor (like Foiani on the Giulini recording) and consequently the great scene between him and Filippo loses a little in tension.

Crowning the cast is Agnes Baltsa as Eboli in one of her best recorded roles. The voice is at its absolute peak, the lower voice rich and powerful, the top notes gleamingly firm. Her O don fatale is absolutely thrilling, as it was when I saw her in the role at Covent Garden, when she pretty much stopped the show. This luxury casting continues into the smaller roles with José Van Dam as the Monk, Edita Gruberova as Tebaldo and Barbara Hendricks as The Voice from Heaven.

Karajan’s tempi are sometimes a little too measured, but he has the virtue of never letting the tempo sag. If only the sound were more maneagable, I might listen to it more often. As it is, Giulini remains my yardstick for the opera.