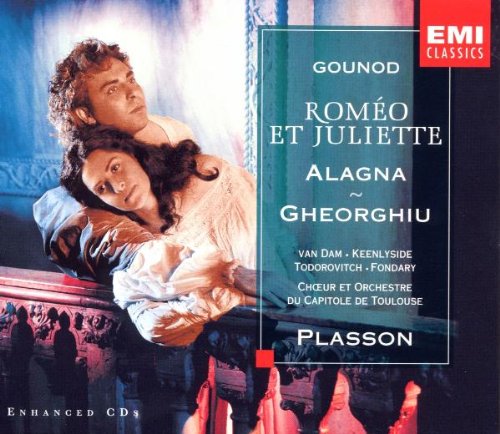 I first saw Alagna, when he sang Roméo in a new production of Gounod’s opera at Covent Garden, one year before he made this recording. There was a real sense of excitement in the house on that occasion, and a sense that maybe we had at last found a successor to the big three (Pavarotti, Domingo and Carreras). That initial promise was never entirely fulfilled, though, in my opinion, he continued to be at his best in French opera and he makes a superb Roméo in this excellent recording, fresher and younger sounding than the stylish, but aging, Alfredo Kraus on Plasson’s first recording of the opera.

His Juliette on the occasion of the Covent Garden performances was the girlish Leontina Vaduva, but here she is replaced by Angela Gheorghiu, the other half of what was at the time the golden couple of opera. There is no denying the beauty of the voice, but she sounds, to my ears at least, a mite too sophisticated in the opening scenes. That said she rises superbly to the challenge of the poison aria in Act IV, which is often omitted by lighter voiced sopranos.

José Van Dam and Simon Keenlyside as Frère Laurent and Mercutio are both excellent; Marie-Ange Todorovitch as Stéphano not so much.

The performance is note complete, even up to the ballet music, and Plasson has an even better grip on the score than he had in his first recording with Alfredo Kraus and Catherine Malfitano.

A clear first choice for this opera, I’d have said 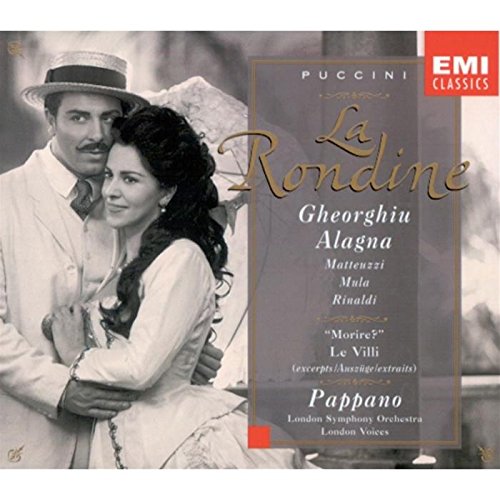 Though Puccini’s attempt at Viennese operetta was a great success at its premiere in Monte Carlo, it failed to excite the Italian public, garnering disappointing reviews at its first Italian performance in Bologna and going down even less well with critics when it reached the Teatro dal Verme in Milan. Consequently it never quite achieved the popularity of La Bohème, Tosca, Madama Butterfly or Turandot, let alone Manon Lescaut, La Fanciulla del West or even Il Trittico, though this recording and the production which followed it at Covent Garden (with the same two leads) went a long way to changing that and it is performed much more often now than it once was.

Although there had been two previous recordings, one with Anna Moffo as Magda and another with Te Kanawa and Domingo in the two leading roles, both excellent in their own way, this one swept the board and won the prestigious Gramophone Record of the Year award, along with a plethora of others. What principally sets it apart from those previous recordings is the superb conducting of Antonio Pappano and the playing of the London Symphony Orchestra at the top of their form.

It also has both Gheorghiu and Alagna, at the height of their game, in roles which were ideal for them, much more specific in their responses to the text and drama than the somewhat generalised Domingo and Te Kanawa, more vocally glamorous than Moffo and Baroni. We also have a nicely contrasted secondary couple in Inva Mula and Wiliam Mateuzzi.

The recording also adds a new entrance aria for Ruggero, based on a song by Puccini (Morire?), which is included as an appendix. The opera being rather short, EMI also included excerpts from Puccini’s first opera Le Villi, which whet the appetite and only make you wish they’d recorded the whole thing.

It is a charming if slight work and this gorgeous recording definitely takes the palm as the best to be had. Highly recommended.

Is it churlish to point out that, though this collection includes much that is desirable, there is also a great deal of material one might consider “essential” on EMI, for whom Gheorghiu recorded for the lion’s share of her career? First contracted to Decca, she soon switched to EMI in order to be with the same label as her husband, Roberto Alagna, with whom she made many now well known complete opera sets. However it was Decca who first signed her up after her sensational debut as Violetta at the Royal Opera House, Covent Garden, and here they pay tribute to her with a well filled disc of excerpts from the few recordings she made for the label before she left them.

There are two excerpts from that 1994 Covent Garden La Traviata, a reflective Ah, fors è lui, technically assured Sempre libera and an affecting Addio del passato. Solti’s conducting is, as always in Verdi, a bit rigid but it is easy to understand why Gheorghiu had such a success in the role.

Next chronologically are five arias from her first recital disc made in 1995; Wally’s Ebben? Ne andro lontana, Marguerite’s Jewel Song from Faust, Il est doux, il est bon from Massenet’s Hérodiade and Vive amour qui rêve from his Chérubin. The Wally piece is beautifully sung, though she doesn’t quite capture its aching loneliness and the Jewel Song sparkles lightly as it should. The Aubade from Chérubin is also lovely, and I am reminded that I first saw her in the secondary role of Nina in the production of the opera which the Royal Opera, Covent Garden mounted with Susan Graham in the title role. She made quite an impression too. Probably the best of all these selections is the aria from Hérodiade, which is both gorgeous and gorgeously sung.

From the 1996 Lyon production of L’Elisir d’Amore we have Adina and Nemorino’s Chiedi all’aura lusinghietta, in which I find her, as I did in the theatre, just a mite too sophisticated.

There are so many good recordings of La Boheme that Chailly’s 1999 recording with Gheorghiu and Alagna is quite often forgotten, which is a pity as it’s actually very good indeed. From this set we have Gheorghiu’s touchingly sincere Si, mi chiamano Mimi through to the end of the act, and also her moving rendition of Donde lieta usci.

Perhaps most impressive of all are the items taken from her Verdi recital with Chailly. She might not quite match the breezy insouciance of Callas or Sutherland in Elena’s Merce, dilette amiche, but she seems almost perfectly cast as Amelia in her Come in quet’ora bruna. Both Leonoras are beautifully sung too, and there is a dark loveliness to her tone, which reminds me, surprisingly perhaps, of Leontyne Price.

The disc finishes, fittingly enough, with the fifth take from her first album, a piece from Romanian composer George Grigoriu’s Muzika, slight in musical value, but charmingly delivered.