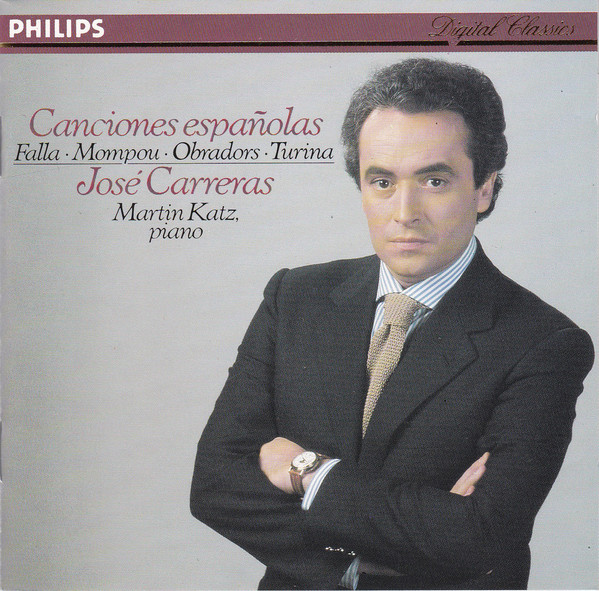 It certainly makes a change to hear Falla’s Siete canciones populares españolas sung by a man, and why not? It is not so unusual to have a father sing a lullaby to his son, and drovers are usually men, aren’t they? Though I might ultimately prefer to hear the cycle sung by Victoria De Los Angeles or Conchita Supervia, I rather enjoyed Carreras’s sensitive performance.

The Mompou cycle, also a favourite of De Los Angeles, also goes well and I especially enjoyed his gently melancholic version of the lovely Damunt de tu nomes los flors. Elsewhere he can be caressingly sensitive or ebulliently passionate, as in the Turina Poema, which brings the recital to a splendidly forthright close.

He is miked fairly close and his diction so precise you can almost taste the words. Martin Katz makes a terrific collaborator rather than accompanist, some of the piano parts being quite fiendishly difficult.

Quite aside from David Daniels’s pre-eminence as a Handel singer, he could also be credited with treading where few countertenors dare to go. In this mixed recital he adds to the more usual countertenor repertoire of seventeenth and eighteenth century song, Lieder by Beethoven and Schubert, French chanson by Gounod and Poulenc and English song by Vaughan Williams. Other recitals will see him venturing out into American song and Broadway, and he even made a recording of Berlioz’s Les Nuits d’Eté. He has never been one to cofine himself to the usual areas of countertenor repertory.

To all he brings great beauty of voice, a superb legato and a fullness of tone rare in countertenors, and an innate musicality. This fullness of tone is not a mere fabrication of the gramophone as I saw him live on many occasions and can attest that the voice rang out freely in all the venues I heard him. In addition he has a winning personality with a rare gift of communication, which comes across in all his discs.

Many of the songs here are concerned with night (the disc, after all is called Serenade) and the pervading atmosphere is therefore one of quiet reflection, but gaiety puts in an appearance too, and we note the singers facility in fast moving music, without a hint of an aspirate. We also note how the singer’s expression changes from one song to another, making us feel we can see as well as hear.

We start with a group of Lieder framed by Beethoven’s and Schubert’s setting of Adelaide, both beautifully sung. He gives the girl’s voice a suitable urgency and death a darker more consolatory tone in Der Tod und das Mädchen, but the prize of this group is his wonderful performance of Nacht und Träume, his legato impeccable , the long line firmly held. This is beautifully ccomplished singing and absolutely no allowances need to be made for the limitations of the countertenor voice.

From here we move to a group of songs by Caldara, Gluck, Cesti and Lotti, the more usual repertoire for this type of voice. Caldara’s Selve amiche soothes the soul, whilst Lotti’s Pur dicesti, o bocca bella is irresistibly light and charming. The Gounod and Poulenc items are all superb, the Vaughan Williams beautifully characterised, finishing with a movingly heartfelt Hands, eyes and heart.

The final items bring us back to more familiar countertenor territory, with joyful performances of Sweeter than roses and I’ll sail upon the Dog Star, followed by an eloquently comforting Evening Hymn, which brings to a close an eminently satisfying recital. Martin Katz is throughout a worthy partner.

As I said earlier, I saw Daniels live on many occasion, and this recital replicates to perfection what it was like to hear him in the concert hall. There was never any difficulty hearing him and he had the rare ability of drawing the audience in, of making each person feel he was singing just for them.