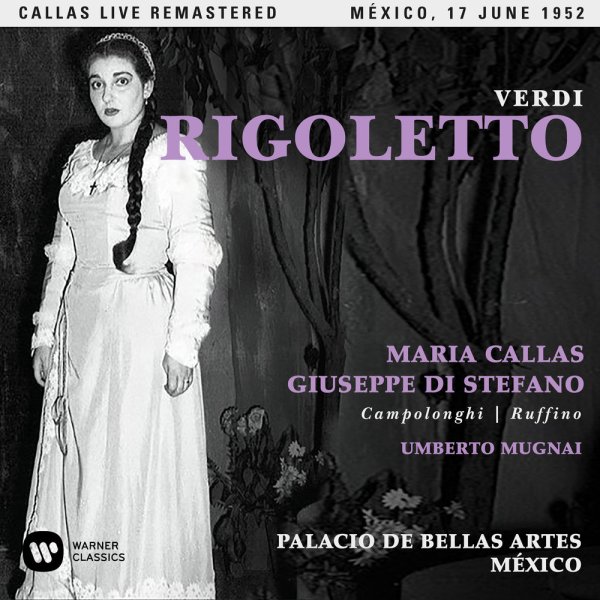 This is actually the first time I’d heard this performance complete. Previously I’d only heard excerpts in wretched sound, which hadn’t encouraged me to investigate further, especially given the excellence of Callas’s studio recording with Gobbi and Di Stefano and Serafin at the podium.

Well the first thing to say is that the sound is actually quite good, the voices well caught and much clearer than anything I’d heard before. Unfortunately the performance itself, save for Callas’s miraculous Gilda, is something of a mess, and I wonder why Warner decided to include it, especially as they omitted the superb live La Scala Un Ballo in Maschera of 1957.

One should also note that the prompter is a palpable presence, shouting rather than whispering the lines to the soloists. Oddly enough he disappears completely at the beginning of Tutte le feste and Callas muffs her first lines.

So let’s get the problems, and there are plenty of them, out of the way first. Umberto Mugnai doesn’t appear to have any control over his resources whatsoever, and frequently coordination between pit and stage falls apart completely. The score is also cut to ribbons, far more than was traditional at the time. It is notable that when things go awry, it is usually Callas, who presumably couldn’t even see the conductor, who brings things back on track. Even in such chaotic surroundings, her innate musicality shines through.

The last act is the biggest mess of all, and all the singers go out of sync with the orchestra in the storm ensemble, despite Callas’s best efforts to bring everything back under control. The quartet isn’t much better, and ends with all the singers, save Callas, out of tune, not that it bothers the audience who give it a rapturous reception. Nor does it concern them that just before that Di Stefano had ended La donna e mobile seriously flat. Forced to encore the aria, his second attempt isn’t much better.

Piero Campolonghi, who plays Rigoletto, has a fine enough voice, but, oh dear, what a ham! He delights in holding onto notes longer than he has to, adding extraneous sobs whilst others are singing and shamelessly playing up to the audience, who, it has to be said, lap it all up with enthusiasm. He has absolutely no idea who or what Rigoletto is. Oh how I missed Gobbi.

Di Stefano does at least have the measure of the Duke. He has charm in abundance, and we can understand why Gilda could be taken in by such a man, but, without a strong hand at the helm, he can be careless of note values and rhythm, and he too plays shamelessly to the gallery. The rest of the cast is decidedly provincial.

That Callas’s Gilda, a role she was singing for the first time, should emerge virtually unscathed from this shambles of a performance is a miracle indeed. She makes a couple of decisions she would later regret, such as taking an upward ending in Caro nome, which allows her to finish on a secure, but unpoetic top Eb in alt, rather than Verdi’s written rapturous trill on the lower E  (something she does to brilliant effect in the studio recording). She also ends the Quartet on a powerful (and unwritten) top Db (but then, with all the singers belting out their lines, the written quiet ending would have been out of the question).

Aside from these miscalculations, made to appease the Mexican audience’s love for high notes, her Gilda is one of her most exacting characterisations, and it is a great pity that she was never tempted to sing the role on stage again. Had she done so, we might well have completely rethought the role, much as we did that of Lucia.

Her voice is in superb condition, infinitely responsive and wonderfully limpid, the tone wondrously lightened to dispel any associations with Abigaille, Kundry, Elena, Aida and Armida, the roles we have heard her sing so far in this live set. Furthermore her Gilda is a character of real flesh and blood, with a fullness of heart in her duets with her father that prepares us for the sacrifice she makes later; a closeted romantic dreamer suddenly propelled into a world far beyond anything in her experience. Not only is her characterisation of the role a revelation, but her singing qua singing is exquisitely realised, her musical instincts unfailingly right, and ultimately her Gilda rises like a phoenix from the ashes of its crude surroundings.

Gilda is another role one would not readily associate with Callas. She did sing it on stage for two performances in Mexico in 1952, but, unhappy with her performance, never sang it again except for this recording made in 1955. The Mexico performances are a bit of a mess and sound under-rehearsed, but Callas is superb, and one notes how it is often she who keeps the ensemble together, even though she was so blind on stage she could never see the conductor. It is actually something of a tragedy that she didn’t sing the role more often. If she had, then people may have rethought the role of Gilda, as they did that of Lucia. It is usually sung by a light voiced lyric coloratura, who manages Caro nome well enough, but can’t really muster the power to dominate the ensembles in the last two acts, as she should. It’s something I’ve noticed myself. Not so long ago I saw the opera at Covent Garden with Aleksandra Kurzak as Gilda. She looked ideal, convincingly acted the ingénue, sang a wonderful Caro nome, but tended to be drowned out in the final act, especially in the storm scene.

No problem there for Callas of course, but the miracle is that she doesn’t simply sing out with the voice of Norma or Aida, when she needs a bit more power, but continues to think upwards. The voice takes on a little more weight after the seduction, but it is still the voice of Gilda, a voice miraculously rinsed and lightened, the tone forwardly produced.

I often think it odd that when people talk about Verdi sopranos, it is the voices of Tebaldi and Leontyne Price they have in mind, but could either of those sopranos have sung Gilda, or Lady Macbeth, or any of Verdi’s early roles? Tebaldi may have sung Violetta, but it wasn’t a natural for her, the coloratura in Sempre libera smudged (and transposed down in live performances). Nor did Tebaldi sing the Trovatore Leonora on stage, as the role lay too high for her. Price did of course, and she was an appreciable Leonora, though she doesn’t sing with the same degree of accuracy as Callas. Callas, on the other hand, sang with equal success Gilda and Lady Macbeth, Abigaille and Elisabeth de Valois, Elena and Aida, both Leonoras, Amelia and Violetta, all on stage not just in the studio, and one regrets that she didn’t get the chance to sing more of Verdi’s early operas. What a superb Luisa Miller she might have made, or Odabella in Attila, Griselda in I Lobardi, or virtually any of those early Verdi heroines. Maybe, after all, it is Callas who is the ideal Verdi soprano.

But back to this Rigoletto, in which Callas yet again completely inhabits an uncharacteristic role. In the first two acts, she presents a shy, innocent young girl, with a touch of wilfulness that explains her disobedience to her father. In the duet with Rigoletto, we feel the warmth of her love for him, and in the one with the Duke, the shy young girl awakening to passion. You can almost see her blushes when the Duke first appears to her. She was asked once why the single word uscitene resounded with such a strange colour. “Because Gilda says go, but wants to say stay,” was her simple answer. Actors might be used to such psychoogical distinctions but it is rare indeed to find it in singers. Caro nome is not just a coloratura showpiece, but a dreamy reverie, and ends on a perfect rapturous trill as she exits the stage. In Act III her voice takes on more colour (Ah, l’onta, padre mio) and it is Tutte le feste that becomes the focal point of her performance, her voice rising with power to the climax (nell’ansia piu crudel) as  she describes the horror of what happened, and note how at the opening she matches her tone to that of the cor anglais introduction. She has the power to ride the orchestra in the storm scene in the last act, and the final duet with Gobbi is unbelievably touching. As usual her legato is superb, phrases prodigious in length, shaped and spun out like a master violinist. It is a great pity she didn’t sing Gilda more often, for it is a considerable achievement.

There are other reasons to treasure this performance of course, chief among them being Gobbi’s superbly characterful, endlessly fascinating and heartrending performance of the title role. Gobbi and Callas always had a striking empathy, and the three duets for father and daughter in this opera, gave that relationship full rein. Some have remarked that Gobbi’s voice was not a true Verdi baritone (whatever that means), but, like Callas, he was successful in a range of different Verdi baritone roles, his most famous probably being Rigoletto. Who has ever matched Gobbi in tonal variety and vocal colour, and psychological complexity? None that I can think of. Pari siamo is superbly introspective and then in Cortigiani! he lashes out like a wounded animal, before breaking down in accents that are pathetically heartrending. To those who say he could not sing with beauty of tone, I would say there are plenty of moments in the score which refute that assertion,  the Piangi section of the Act II duet, where he spins out a pure legato which is both musical and shatteringly moving, being a case in point.

Di Stefano may not be quite in their class, and there are certainly more elegant Dukes on record, but he sings with enormous face and charm. One can imagine why Gilda would be captivated by this Duke. He can be musically inexact (some of the tricky rhythms in Act I go a bit awry), but his voice is in fine shape, and he sounds both charming and sexy, which is as it should be. Nor does he play down the casual cruelty that lies at the heart of his character. I’d say it’s one of his best recordings.

Serafin’s conducting is in the best Italian tradition, both lyrical and dramatically incisive. He is totally at one with Callas and Gobbi in the duets, giving them ample time to make their dramatic points, but whips up quite a storm in the finale to Act II.

The sound is truthful and clear, the voices wonderfully present, and, as in all the Warner sets so far, sounds excellent on my system.

Years ago I remember an acquaintance, not really a voice fan (or a major opera fan, for that matter), asking me which recording of Rigoletto I recommended. He had the Giulini, and quite enjoyed it, but thought there was something missing. I warned him that some were allergic to Callas’s voice, but lent him my set anyway. A couple of days later he excitedly returned it to me, having ordered the recording for himself. “Fantastic,” he said, “Exactly what I was looking for. Suddenly the whole opera came to life.” Well you can’t ask for much more than that.