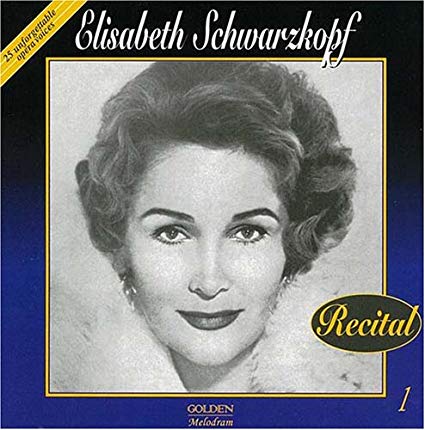 This is not a recital as such, but a collection of off the air recordings made by Schwarzkopf between the years 1941 and 1952. We get the opening of a Berlin Das Rheingold, conducted by Artur Rother (Schwarzkopf as Woglinde), Nie werd ich deine Hulde verkennen from a Vienna performance of Die Entführung aus dem Serail, conducted by Rudolf Moralt (with Emmy Loose, Anton Dermota, Peter Klein and Herbert Alsen), a duet from Weber’s Abu Hassan from 1942, with Michael Bohnen, and part of the Act II finale of Le Nozze di Figaro from La Scala in 1948, with Imrgard Seefried and W Hoefermeyer (who he?) under Karajan. We also get a couple of excerpts from the 1950 Salzburg Festival, both conducted by Furtwängler; Mi tradi from Don Giovanni (on which unusually she takes an unwritten upward ending, presumably sanctioned by Furtwängler though absent from all other versions by her) and Marzelline’s opening duet and aria from the famous performance of Fidelio at which Flagstad sang Leonore. In all Schwarzkopf displays her familiar virtues of pure, firm tone, excellent legato and elegant phrasing, the voice shot through with laughter in the lighter pieces. Marzelline’s aria is sung with a fuller tone than we often hear in this music, but captures perfectly her wistful charm. Ilia’s Zeffiretti lusinghieri is taken from a 1951 Turin Radio Mario Rossi broadcast, but it is not quite so accomplished as the one on her studio recital of the following year.

The rest is is given over to a Hamburg broadcast from 1952, beginning with a lovely performance of He shall feed his flock, from Handel’s Messiah (sung in German). The Act I monologue from Der Rosenkavalier is perhaps less detailed than the one on the complete set under Karajan and no doubt some might prefer it for that reason, though I wouldn’t necessarily be one of them. It’s a lovely performance nonetheless. Schwarzkopf’s Countess is also justly well known, and Porgi amor is sung with creamy tone and matchless legato, but the excerpts from Madama Butterfly (sung in German) don’t really work for her, and indeed Schwarzkopf herself, when she heard them in later years, thought them “rather screechy on top”. She did however approve the aria from Korngold’s Die tote Stadt (the soprano version of the duet Glück das mir verblieb) and rightly so, as this is without doubt the prize of the whole disc. I have never heard it sung better, not by Te Kanawa, not by Fleming, not even by Lehmann, who recorded the duet with Richard Tauber. The pianissimi on the top notes, the diminuendi, the way she fades the tone are absolutely miraculous, no other word for it. Everyone needs to hear this, but getting the recital on disc is quite difficult these days. Fortunately you can hear it on youtube, though you will need to go to the youtube site to hear it.

The whole disc is a fitting repost to all those who think Schwarzkopf was a studio creation, catching her live and on the wing, but treasured mostly for that sensational and unfortunately unrepeated performance of the Korngold.

Ljuba Welitsch shot through the operatic firmament like a comet in the late 1940s and early 1950s. Unfortunately she developed nodules on her chords by 1953 and her international career was over almost before it started. In that brief time her Salome at least became the stuff of legend, and to this day is considered one of the greatest of all times, though a prodjected complete recording with Reiner conducting never materialised. There are two live perforances from the Met, from 1949 and 1952. The latter has the best all round cast, but she is in fresher voice in the former.

These recordings all date from the 1940s when her voice was at its silvery best, and the final scene from Salome, conducted by Lovro von Matacic dates from 1944, when Strauss himself chose her to sing the role at the Vienna Opera in a production, which was to celebrate his eightieth birthday. They worked on the piece for six weeks, with Strauss himself attending the rehearsals, so, from that point of view at least, we should consider her performance here as authentic. Indeed this must be exactly the voice Strauss had had in mind. It remains silvery, youthful and light, and yet cuts through the heavy orchestral textures with no apparent effort. Not only that, but her word painting and identification with the role is so vivid that at the end of the scene one literally feels Herod’s distaste when he commands his soldiers to kill her. This scene alone is indispensable, whether one has one of the complete live recordings or not.

The other arias were all recorded between 1947 and 1949, when the voice was still in fine shape, but they do expose some of her weaknesses. The best of them is Tatiana’s Letter Scene from Eugene Onegin, here sung in German, which teems with girlish impulsiveness and teen-angst longing. There is no sense of strain and the high notes ring out gloriously. Please also take note of the wonderful horn playing of Dennis Brain. This scene ranks as highly as the Strauss in the Welitsch discography.

Musetta’s Waltz makes its effect well, with loads of personality, but she misses the anguish and contrasts in Aida’s Ritorna vincitor, and her Vissi d’arte is rather penny plain. Neither scene really registers anything at all and she has a tendency to rush the beat, which can be quite annoying. The Weber is better, but she still lacks the poise and control evinced by such singers as Elisabeth Grümmer and Elisabeth Schwarzkopf.

When the voice started to let her down, she did not retire, but moved to character roles, most famously singing the Duenna in Karajan’s first recording of Der Rosenkavalier. As late as 1972, she played the role of the Duchess of Crakentorp in a Fille du Régiment at the Met.

Not a recital in the true sense of the word, as all these performances were recorded for 78s, this compilaton is essential none the less for the Strauss and Tchaikovsky at least.