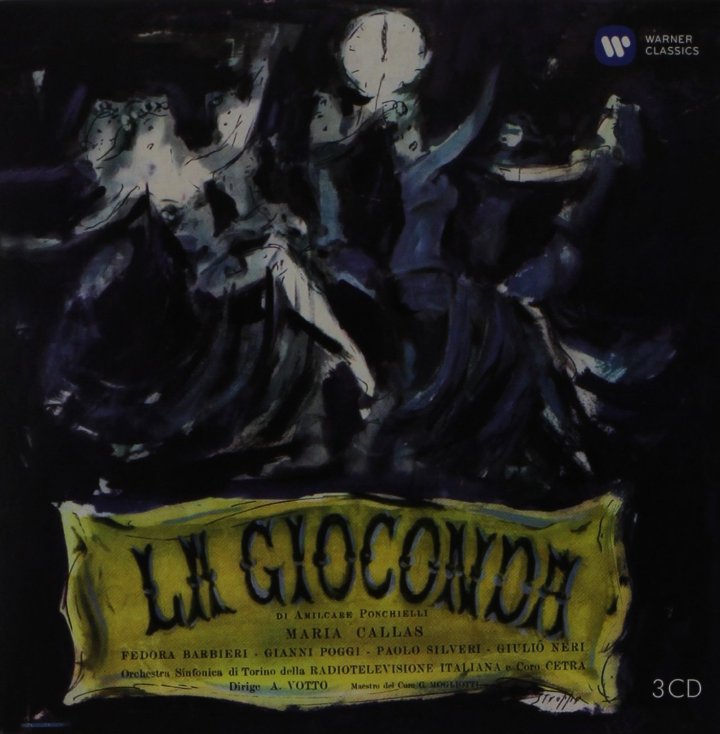 Callas’s first ever complete studio recording was made for the Italian firm Cetra in 1952, before she had signed with EMI. The role of Gioconda had furnished her with her Italian debut in 1947, and was the occasion she met two of the most important men in her life, her mentor Tullio Serafin and her future husband Battista Meneghini. Paradoxically she would make her second recording of the opera at the time of her affair with Onassis, and when she was separating from Meneghini.

When Callas recorded La Gioconda for Cetra she was still a large lady and at her vocal peak. It was recorded just a couple of months before she made her spectacular debut at Covent Garden in Norma and shortly before her only series of performances as Lady Macbeth at La Scala, a role one wishes had figured more in her career. She then went on to sing Gioconda at La Scala, her last performances in the role until the EMI recording in 1959.

Given the sheer animal power and massive, freewheeling brilliance she could command at this stage in her career, you would think this Cetra recording would, in all but matters of sound, win hands down over the later one, recorded seven years after when her vocal powers were failing, but I’m not sure it’s that simple, and, whilst listening to this one, there were quite a few passages where I found myself hankering after the later recording. True, the singing is often magnificent, and it is easy to be swept away by the coruscating force of her delivery, but I find myself missing some of the refinements she has made by the time of the second recording. This may be a controversial opinion, but this one seems to me to be a series of thrilling highlights, whereas the characterisation on the EMI set feels more of a piece, with a cumulative power I don’t get here, for all the added security of her voice; and actually there are certain, purely vocal moments, she manages better on EMI than she does on Cetra (the pitfalls of Ah come t’amo, the E un di leggiadre section from Suicidio, the whole of the section after she gives Laura the sleeping draught, for instance).

As against that, I should also state that her performance of Suicidio here completely floored me when I first heard it. I had no idea a female voice, a soprano at that, could sing with such passion, could have such powerful chest notes. It was absolutely staggering and one of the things that first turned me on to the genius of Callas in the first place. If I later got to know the opera better from the EMI recording and place that at a slightly higher level of achievement, it is none the less  a close-run thing.

The Warner engineers have done a great job of the re-mastering and it sounds much better than I remember it from my previous CDs, though obviously not so good as the stereo EMI set. One also misses the greater refinement of the La Scala orchestra and chorus.

As for her colleagues, it is largely a case of swings and roundabouts. Barbieri is a much more positive presence than the young Cossotto as Laura, but none of the men on either of the sets are particularly good. Ferraro on EMI isn’t very subtle, but he certainly makes a pleasanter sound than the awful Poggi. Honours are about equal between Silveri and Cappuccilli, Neri and Vinco. Votto’s conducting isn’t much different in the two sets, and remains some of his best work on disc.

One thing is for sure, Callas as Gioconda is an absolute must, and, regardless of any reservations surrounding her colleagues or recording quality, eclipses every other performance of the role on disc. 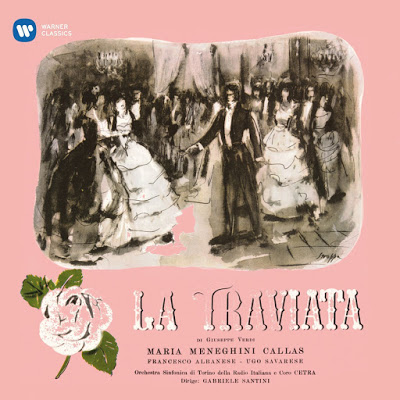 In one sense it’s a shame this Cetra recording of La Traviata was ever made. Had it not been, Callas would have been the Violetta on the Serafin La Scala recording with Di Stefano and Gobbi instead of Stella. Her contract stipulated that she could not re-record the role for 5 years. Legge presumably felt he couldn’t wait any longer to add a recording of such a central Italian classic to his catalogue.

Whatever the reasons, Callas was furious with Legge for engaging Stella and with Serafin for conducting it without her. For a while she and Serafin didn’t speak and he is notably absent from her recording schedule for the following year, 1956.

In retrospect maybe Legge should have waited till Callas was free to record Violetta again in 1958, the year of Callas’s most searchingly complex stage performances in the role (Lisbon and London). Had he done so EMI would no doubt have had the best-selling La Traviata of all time. As it is, the Stella recording was never a big seller, and only received a CD issue, when Testament unearthed it some years ago. Bad call, Walter.

Of all the roles in Callas’s repertoire, it was Violetta that went through the greatest transformation from her debut in the role in 1950, through the famous Visconti production at La Scala in 1955 to those last, movingly poetic performances in 1958 in Lisbon and London. It was the role she sang most often after Norma, and the role she most often considered for a comeback. There were discussions of a recording for EMI even as late as 1969, when, vocally, it would have been out of the question. Callas considered it very much her role, that of the woman who gave up everything for love. Maybe there was a parallel here with her own life. Didn’t she give up everything for love?

This recording of La Traviata was the first one I owned and the first of her Violettas I heard. It wasn’t that easy to get hold of, and my copy was a reissue on Pye Ember. I had no idea of the existence of any of the live recordings, and, had I never heard any of them, I would no doubt have been happy enough with her Violetta, as recorded here, though not necessarily with its surroundings. Compared to her EMI releases, this is a decidedly provincial affair. Santini’s conducting is leaden and neither Albanese as Alfredo nor Savarese as Germont are in the first rank. But at least we have Callas, and, if not as subtle or as heart-rending as she was to become, she is still a great Violetta, and still better than anyone else in the role.

The demands of the first act are more easily encompassed here than they were to become in later performances, though the top Cs in Sempre libera seem slightly tense, as does the concluding Eb. Still it’s freer and more open here than it is in any of the later sets and scale passages are wonderfully fluid. She is tremendously affecting in the duet with Germont, and fails here only in comparison to her later self. Other than this, her traversal of the role is not as complete as it is later to become. There are plenty of affecting moments to be sure, some in the duet with Germont, (the desperation with which she sings Non sapete, for instance) and especially the farewell to Alfredo with the lead up to Amami, Alfredo which seethes with that intensity so peculiar to her. In the second scene the great arching phrase, Che fia? Morir mi sento is too much of an outward sentiment as is Alfredo, Alfredo, di questo core, beautifully though they are sung.

Act III has its moments too. Addio del passato ends on a much more secure pianissimo high A than we get at Covent Garden, but how much more moving is that thread of tone with which she ends the aria in London. Parigi o cara is saddled with  Santini’s leaden conducting, but Gran Dio morir si giovane strikes the right note of despair and Prendi quest’e l’immagine is eloquently moving, if not so eloquent as it was to become.

In short, if no other recording of Callas as Violetta existed, this would be my first choice for the opera. But the fact of the matter is that by 1958, she had refined her interpretation so much that this 1953 performance seems unfinished beside it, almost like a rehearsal for the main event.

Furthermore, in both Lisbon and London, she has a better supporting cast and conductors, and the sound, in London at least, is excellent. I was pleased to hear this performance again, and delighted to have it once more in my collection. Callas’s Violetta, in any of its incarnations is a major achievement after all, but I know it is still to Covent Garden that I will most often return.

I might just add that Warner have done wonders with the sound compared to what I remember of my rather muddy Pye Ember LP version.