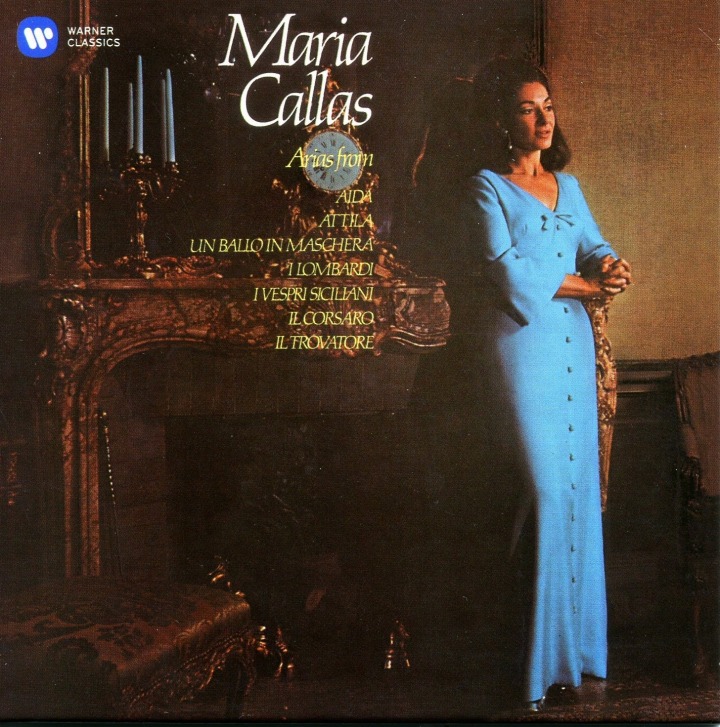 There never actually was a Verdi Arias Vol III, though one had been planned. Warner here use the cover of an album issued in 1972, of material which had been sitting around in the vaults, and which Callas eventually agreed to have issued. The original album coupled  the Act I Scena from Il Pirata (now on Rarities) with Amelia’s Act Il Scena from Un Ballo in Maschera, O madre dal cielo from I Lombardi, Arrigo, ah parli a un core from I Vespri Siciliani, Liberamente or piangi from Attila and Aida’s Ritorna vincitor. The Il Corsaro arias, Amelia’s Morro, ma prima in grazia and Leonora’s Tacea la notte placida appeared on a later album called The Legend, coupled to some unissued 1955 arias from La Sonnambula, none of which were cleared for release by Callas.

That 1972 album was actually one of the first Callas LPs I owned. It seems unbelievable now, but in the early 1970s, most of Callas’s back catalogue had been deleted by EMI, who presumably thought that the advent of stereo rendered it obsolete. At that time I had only heard a few of her recordings and I remember sampling a couple of arias from this disc in Windows, the local classical music store in Newcastle-upon-Tyne. Initially alienated by the harsh sounds I heard coming from the listening booth, I left the shop without buying the disc. However somehow those tones carried on resonating in my mind’s ear, and eventually I went back and bought the LP. It was a decision I never regretted, as I learned to listen not just to the voice itself, but what she was doing with it. It also introduced me to some Verdi I’d never heard before, namely the arias from I Lombardi, Attila and I Vespri Siciliani. I knew absolutely then that Verdi was to become one of my favourite composers.

Taking first the arias not on that original LP, we find the arias from Il Corasaro recorded in 1969, really remarkably good. Her legato line is better than both Caballe and Norman on the Philips studio recording of the opera, and she unerringly captures the mood of each aria. The Trovatore has some magical moments, but at no place challenges her superb recording with Karajan. Amelia’s Morro, ma prima in grazia is very good indeed, with a superb, firm top B leading into a perfectly shaped final cadenza.

Swings and roundabouts on the rest. The tone at the beginning of the I Lombardi aria (the first track I listened to in the record shop) is indeed somewhat uningratiating, but once past the opening statement, she is in securer form, and moulds the line beautifully. Both the Attila and I Vespri Siciilani arias go well, the legato line beautifully held, and with Rescigno conjuring up some gorgeous sounds from the orchestra for the Sospendi o rive section of the Attila aria. I’d certainly sooner hear this version than Deutekom’s pallidly voiced one on the Philips complete recording. Amelia’s grand Act II Scena is full of passion, drama and fantasy. Though the ascent to top C is hard won, she grandly phrases on and through the note, so that it does not become the focal point of the aria. Still this does not challenge her performance on the complete set of 1956, nor the superb live performance from 1957.

The one incontrovertibly great performance on the disc is Aida’s Ritorna vincitor. This was not originally planned, but sessions had been getting a bit tense and Callas and the orchestra took a break. During the break Michel Glotz, the recording producer played a performance of Crespin singing the aria, which had been recorded the previous day. Callas was incensed, finding the performance completely antithetical to her sensibilities, lugubrious and slow. “I could hardly get the words out, when I did this with Maestro Serafin.” On learning that the parts were still there, she said, “Come on, Nicola, let’s do it!” and this is what they did – in one take! As always Callas loved a challenge, and this was as if someone had laid down the gauntlet. Somehow she recovers much of her old security, and the aria is brim full of drama and passion. Just listen to the anguish she pours out in Ah! non fu in terra mai da più crudeli angosce un core affranto, the desperation of Ah, sventurata che dissi?, with the final plea to the Gods heart wrenchingly poignant. This is Callas at her best.