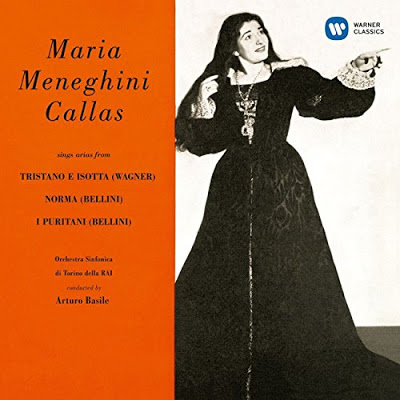 So finally I come to the end and find myself, after many hours of fantastic listening, at the beginning, Callas’s first commercial recordings and the 78s that introduced the world to the voice of Maria Callas. The recordings followed a radio concert of the same material (plus Aida’s O patria mia) and were obviously intended to showcase Callas’s versatility, a pattern which was to follow in some of her EMI recitals, like Lyric and Coloratura and the first French recital.

Callas was only 25 when these recordings were made, but they display an artistic and vocal maturity far beyond her years. She first sang the role of Isolde under Serafin in 1947 in Venice, literally sight singing the role at her audition. Serafin, who had conducted her in her Italian debut as Gioconda, was suitably impressed and hired her immediately.

The Liebestod is of course sung in Italian, but it is more than just a curiosity. This is a warm, womanly Isolde who rides the orchestra with power to spare. Note too how easily she articulates the little turns towards the end of the aria. Her legato is, as usual, impeccable, and the final note floats out over the postlude without a hint of wobble.

Norma’s Casta diva and Ah bello a me are sung without the opening and linking recitatives, but the long breathed cavatina is quite possibly the most beautiful she ever committed to disc, and the cabaletta, though it lacks some of the light and shade she would later bring to it, is breath taking in its accuracy and sweep.

But what caused the biggest sensation at the time was the Mad Scene from I Puritani. What was considered a canary fancier’s showpiece suddenly took on a tragic power nobody suspected was there. Qui la voce is sung with a deep legato, the long phrases spun out to extraordinary lengths, but with an intensity that never disturbs the vocal line. Vien diletto almost defies belief. No lighter voiced soprano has ever sung the scale passages with such dazzling accuracy, nor invested them with such pathos, emerging, as they do, as the sighs of a wounded soul. And to cap it all, this large lyric-dramatic voice rises with ease to a ringing top Eb in alt. I have played this to doubting vocal students before now, and they have sat in open-mouthed disbelief. I remember one opera producer friend of mine once telling me that listening to it made him profoundly sad. “I know I will never hear live singing of that greatness in my lifetime,” he confided to me. If ever confirmation were needed of the greatness, the genius of Maria Callas, it is here in these, her very first recordings, and especially in this astonishing recording of the Mad Scene from I Puritani.

For my part, I have enjoyed every moment of my journey from those late recordings, where the genius would flash through to offset the evident vocal problems to these earlier ones where the voice had an ease and beauty that deserted her all too soon. Callas is and remains the pre-eminent soprano of the twentieth century. I know of no other singer who has made music live the way she did. A post on Talk Classical recently discussed underrated singers. I’d be tempted to add the name of Maria Callas, because, to my mind, her genius was inestimable. None of the accolades she has received seem eloquent enough, and I certainly can’t add to them.

50 years after she last sang on the operatic stage, she is still causing controversy, and no doubt always will. Her career may have been short, but was it Beverly Sills who once said, “Better 10 years like Callas than 20 like anyone else?”