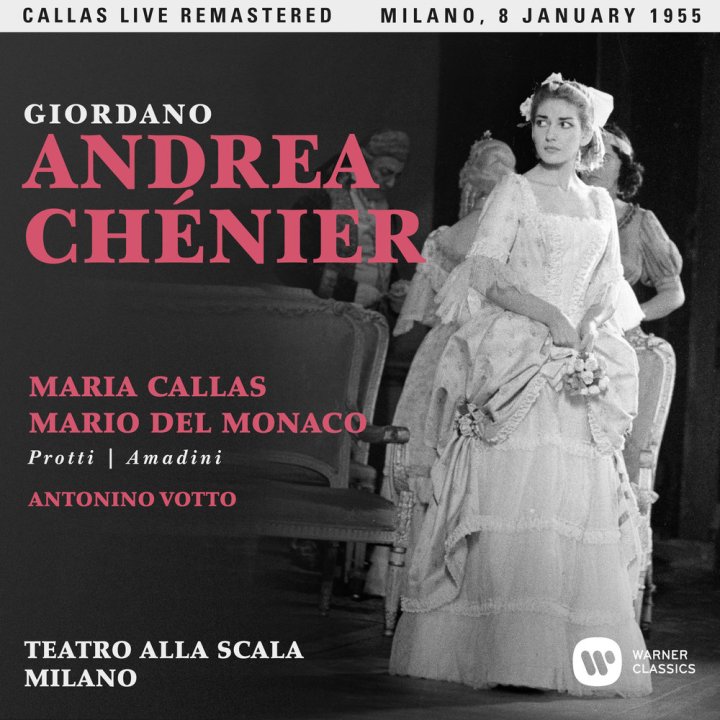 Andrea Chénier is an oddity in Callas’s career. The opera belongs to the tenor, Maddalena’s being a somewhat muted presence, confined to one aria and a couple of duets, both of which are led by the tenor. Of course she shouldn’t have been singing it at all, as the opera she was scheduled to sing at La Scala after the season’s opening La Vestale was to have been Il Trovatore, an opera much more conducive to her gifts. The story goes that the tenor, Mario Del Monaco pleaded indisposition. He did, however, feel well enough to sing Chénier rather than Manrico, and La Scala made the substitution. Who knows the vicissitudes of tenors? Maybe he feared being up against Callas in one of her greatest roles (Leonora), maybe he expected her to step down, as, not knowing the opera, she would have been perfectly within her rights to do. As it is, Callas accepted the challenge of learning the role in just a few days, though one wonders why she bothered. Maddalena was very much a Tebaldi role and a large portion of the house was against her from the outset. After these six performances she never sang the role again, and her appearance in the opera was soon forgotten, especially after the spectacular success of the next three productions she appeared in at the house.

Warner don’t appear to have found a new sound source for this performance, and this transfer sounds very much like the old EMI, regardless of claims of improvements in pitch. I guess you can’t do much with a sow’s ear.

Aside from the Aida she sang before her official debut, and Il Trovatore in 1953, this was the first time Callas was singing in a regular repertory opera at La Scala, and despite her intelligent and sensitive reading of the score, a portion of the audience were against her from the outset, no doubt more used to a much more forthright “can belto” style of singing verismo, . There were even rumours being bandied about that it was she who had demanded the substitution in order to steal away one of Tebaldi’s most successful roles. (Considering Callas never even sang Tosca at La Scala, this is a ridiculous assumption, not born out by the facts.) It is rather ironic, though, that it is Callas’s rendition of the aria La mamma morta, which achieved popular success after it was featured in the movie Philadelphia.

So how does the performance itself stand up after all this time, with all its attendant scandal consigned to the history books? Well, pretty well actually. It was a La Scala stalwart and the audience respond enthusiastically throughout, even giving the comprimaria, Lucia Danieli’s short solo as Madelon in Act III a rousing reception.

Protti, not usually the most subtle or imaginative of singers, makes a powerful Gérard and all the smaller roles, of which there are many, are cast from strength, with Votto much more at home in this opera than he sometimes is in bel canto. Del Monaco shows precious little sign of any indisposition and has a rousing success in a role that he was particularly well known for.

So, what of Callas? Whether it can be attributed to the weight loss or the shift in her repertoire, it cannot be denied that the voice is not as rich as it was when she sang Kundry, for instance, back in 1950, and those who prefer to hear the fuler tones of a Tebaldi, a Milanov or, in more recent times, a Caballé, will no doubt find her wanting. However she digs as deeply into the character as the music will allow her to go, and gives us a more psychologically complex character than is usually the case. As usual a mere line, a word of recitative speaks volumes, such as her whispered Perdonatemi to Chénier, when she realises she has offended him. There is no doubt that this Maddalena realises exactly what Chenier is talking about in his Improviso.

The girlishness in her voice has completely dissipated in Act II, and in Act III she delivers a scorching La mamma morta, though the climactic top B goes a little awry, causing a faction of the La Scala audience to voice its disapproval. Note however how the tone colour she uses at the beginning of the aria mirrors the cello solo introduction. As ever Callas’s musical sensibilities are sans pareil.

Both she and Del Monaco sing the final duet with mounting ardour and fulsome tone. Ardoin says they make a downward transposition here, though I don’t know the opera well enough to know if this is true. Whether they did or not, Del Monaco shows precious little sign of any vocal indisposition.

Still, however musically satisfying her Maddalena, it is a side issue in the Callas career, and one wonders why she bothered with it at all. Her greatest genius was revealed in operas of an earlier period, and she had ahead of her in that same season some of her greatest successes at La Scala, first the Visconti/Bernstein La Sonnambula (next up in the Warner box set), a Zeffirelli Il Turco in Italia, and, finally that season, the production that changed for ever people’s perceptions of Italian opera production, the renowned and controversially successful Visconti/Giulini La Traviata.