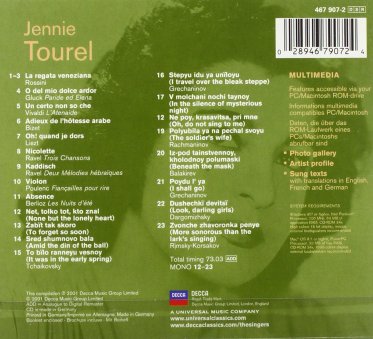 Jennie Tourel was born in Russia in 1900 of Jewish parents, but she and her family left just after the Revolution, temporarly settling in Danzig before moving to Paris. She fled to Lisbon just before the Nazis occupied France and from there to the USA, becoming a naturalised Amercian in 1946.

She had an illustrious career both in the opera house and on the recital stage, and was the creator of the role of Baba the Turk in Stravinsky’s The Rake’s Progress. She was still active when death ended her career in 1973, in fact in the middle of performances of Donizetti’s La Fille du Régiment in Chicago. The longevity of her career is testament to her sound technique, but if the years were kind to her voice, she was also careful never to overtax it. She knew what suited her and stuck to it.

The dates of the recordings on this disc are unknown, but the Italian and French items are stereo, which would place them at least from the early to mid 1950s. Her voice is still admirably firm, with no trace of wobble or excessive vibrato. Her legato isn’t always perfect, and her runs can be lightly aspirated, which mars her performance of the Rossini items, and also of Bizet’s Adieux de l’hotesse arabe, though she sings it with more personality and drama than many.

Berlioz’s Absence is sung with piano, and is notable for the firmness of the line, though personally I prefer a more inward display of longing. Tourel is too loud in places and she rushes the pharse la fleur de ma vie. Much better are Poulenc’s Violon and Liszt’s Oh! Quand je dors and I particularly enjoyed Ravel’s Kaddish, which exploits her rich lower register.

The Russian items are all worth hearing, beginning with a mournful Tchaikovsky None but the lonley heart, the cello obligato adding to the pervading sense of melancholia. As befits the general mood of the Russian items, she uses a bigger, more dramatic sound, but she can also be lightly high-spirited in a song like Dargomizhsky’s Look darling girls. In all she displays a strong personality and superb musicianship.

Song texts and translations are provided on the disc itself, which doubles as a CD-ROM, though, annoyingy, if you want to read them at the same time as listening to the disc, you will have to print them out before playing the disc on a CD player.