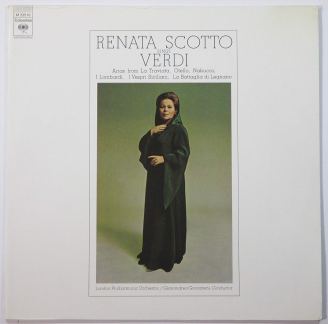 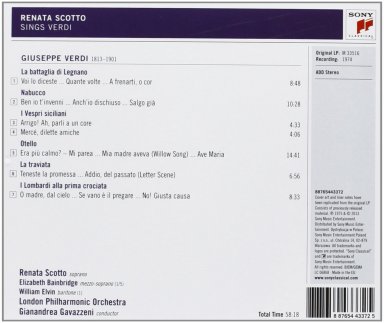 When this recital first appeared in 1975, Scotto had been absent from the catalogues for some time. She was principally known on record for her Butterfly under Barbirolli (recorded for EMI in 1966) and for Mimi, Violetta, Gilda and Lucia (all recorded in the early 1960s for DG).

Butterfly was her calling card for many years, and the recording has remained one of the most recommendable (though, save for Liu in the Molinari-Pradelli Turandot, recorded in 1961, she appears not to have made any further complete opera recordings for EMI until she recorded Abigaille under Muti in 1977).

She first made her mark deputising as Amina in Edinburgh for Callas, who, in poor vocal health at the time, had refused to sing an extra uncontracted performance that La Scala had tried to thurst upon her. That was in 1957 and it would appear that, though she had considerable success on stage, recording companies were not so quick on the uptake. She herself has admitted that she could be a bit prima donna-ish in a “my way or no way” sort of manner, until she met her husband, Lorenzo Anselmi, who, according to Scotto, helped her to become more professional, and think more about the music.

She was at first known as a coloratura, but even in the early 1960s, John Steane notes that her high notes did not seem to come easily and could have a hard and pinched quality. She also had a great success as Butterfly, the role in which she had made her Met debut, but it soon became clear that this was the only repertoire Bing would call on her for. He refused to offer her anything else so she was absent from their schedules for a long time, returning in 1974 to sing Elena in I Vespri Siciliani, under Levine who became her champion. For many years, she was the Met’s house soprano, singing a completely new repertoire, which included Verdi roles like Leonora in Il Trovatore, Desdemona, Luisa Miller and Lady Macbeth.

This Verdi recital also marked the beginning of a new, fairly intensive recording schedule for her. In the ten years since her recording of Madama Butterfly the hardness on top has become more noticeable, and many of the louder notes above the stave are quite strident. There are however compensations in her musicality, her dramatic awareness, her deep legato and the firmness of the line. Then there is the added attraction of her attention to detail and her intelligent use of the words, though occasionally there is a lack of spontaneity. Art does not always conceal art.

There is a good mixture here of the familiar and the not so well known. In the former camp would be Lida’s aria and cabaletta from La Battaglia di Legnano, a fairly conventional piece whose cabaletta is nonetheless energetically exciting, and which Scotto attacks head on. There is a slight suspicion that the voice is a little small for the other early works here (Nabucco and I Lombardi), but she has an innate feeling for Verdian style and the cavatinas of both are beautifully moulded, the cabalettas propulsive and exciting. The voice takes on a lovely melancholy tinta for Elena’s Arrigo, ah parli a un core, which lies mostly in the middle register, though she eschews the written low F# in the cadenza, taking a higher alternative, and sings a bright and breezy Merce, dilette amiche. Best of all, probably because neither takes he much above the stave, are Violetta’s Addio, del passato, the reading of the letter absolutely heart-wrenching, and Desdemona’s Willow Song and Ave Maria, which is alive to every dramatic contrast, her singing full of anxious foreboding. Soon after this she would make a most touching Desdemona both on stage at the Met and on record in Domingo’s first recording.

Some may prefer a richer voice for this music, but few who are more vocally endowed sing with such specificity, such attention to the meaning of the text, such musicality and appreciation of Verdian style. Where other sopranos, like Souliotis and Sass, can be accused of being copycat Callases, Scotto can be said to have absorbed the lessons of Callas without losing her own individuality. This is a very good recital.