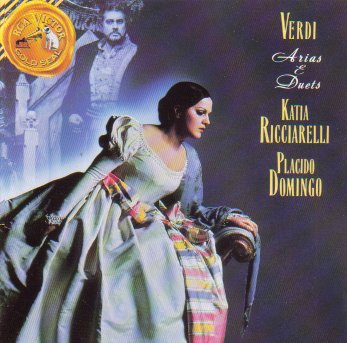 This was Katia Ricciarelli’s debut recital, released in 1972 when she would have been 26. For this 1991 CD release, BMG added two items from a duet recital with Domingo, made at the same time.

Ricciarelli had an illustrious career and prolific recording career, but, it always seems to me, has never enjoyed the acclaim of her slightly older Italian contemporaries, Mirella Freni and Renata Scotto. She perhaps asked a little more of her essentially lyrical voice than it would deliver but, unlike singers like Sass and Souliotis, she was intelligent enough to later drop some of her dramatic roles in favour of more lyric fare. Her Turandot might have been ill advised but, like Sutherland’s, it was confined to the studio.

This Verdi disc catches her at her peak singing, for the most part, a selection of unfamiliar arias from Giovanna d’Arco, I Masnadieri, Jérusalem, Il Corsaro and I Vespri Siciliani as well as arias from Otello, Il Trovatore and Don Carlo, plus duets from Un Ballo in Maschera and Otello with Domingo.

The voice is a beautiful one and she is an imaginative singer, responsive to mood and text, but there are occasions when her legato is not as good as one might wish. If one were to compare her performance here of Medora’s Non so le tetre immagini with a late one by Callas, made in 1969, it is to find that, despite Callas’s by this time waning resources, the long line is maintained, the wide intervals bound more closely together, where Ricciarelli can be a little angular. Nor is Ricciarelli’s coloratura technique as clean as Callas’s. One is grateful for the beauty of the tone and her dramatic involvement, nonetheless.

Ricciarelli is a singer I have come to appreciate more with the passing of the years. I heard her live a few times, on the last occasion at a concert at the Barbican when her voice was probably past its best. The programe consisted mainly of bel canto arias, and I remember well her outstanding singing of Giulietta’s Oh quante volte, so good that it held the audience in rapt silence. She was forced to repeat the aria as an encore at the end of the night.

She is always musical, always alert to the drama, always imaginative and this Verdi disc is a good reminder of her excellence in the field. There are very few sopranos singing today who could touch her in this repertoire.