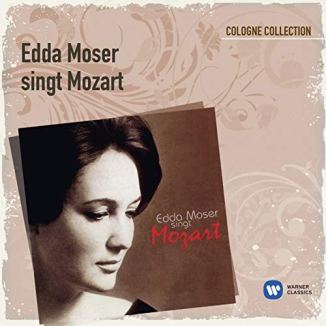 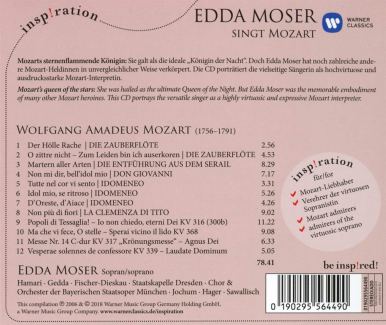 Edda Moser, who was active on the operatic stage during the 1970s and early 1980s, should probably be better known than she is, though many will no doubt remember her from the Joseph Losey film of Don Giovanni in which she played Donna Anna.

Not strictly a recital, this is a collection of excerpts from various Mozart recordings Edda Moser made during the 1970s. Many would no doubt pick Moser for their favourite Queen of the Night, a role she sings on the patchy Sawallish recording, and indeed one notes that most of the music chosen here is for Mozart’s fierier characters.

It starts appropriately enough with the Queen of the Night’s arias and they really are splendid. First of all the coloratura flourishes and high notes are tossed off with ease and yet she also chracterises the music brilliantly. There is authority in her O zittre nicht, rage in her Der hölle Rache. Where many coloraturas sound merely pretty, Moser sounds regal and dangerous.

Next comes Konstanze’s Martern aller Arten which is properly defiant, the coloratura not only accurately executed but filled with affronted contempt. Donna Anna’s Non mi dir displays Moser’s fine legato and she also has the technique to do justice to the coloratura section.

The qualities that make her an excellent Queen of the Night and Konstanze stand her in good stead for Elettra, which she sang on Hans Schmidt-Isserstedt’s recording and she embraces both the lyricism of Idol mio and the fury of D’Oreste, d’Ajace.

The range is exceptional too and during the course of this disc, Moser not only has to sing a low G in Vitellia’s Non piu di fiori but a G in alt in the concert aria Popoli di Tessaglia, an aria Moser herself describes as “Unperformable, written without intelligence, not one beautiful note”. Well I might not go that far, but the high lying flights make impossible demands on the singer, which Moser manages incredibly well. On the other hand the low lying phrases in Vitellia’s aria tax her more and the notes below the stave emerge colourless, almost as if from a different singer.

To finish up we have a couple of examples of her contributions to some of Mozart’s sacred music, which showcase her deep legato and firm line. The voice may not have the creamy beautfy of a Te Kanawa or a Fleming, but it is still a very attractive instrument and she is more responsive to the emotional core of the music than Te Kanawa at least.

This is, without doubt, one of the best Mozart vocal compilations I have come across and is definitely worth hearing.