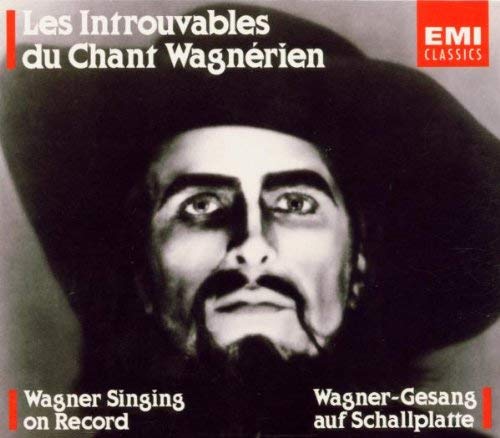 What a treasure trove of great singing this is! Indeed four well filled discs of absolutely amazing singing.

The layout pretty much makes sense too. Disc one is given over to Der fliegende Holländer and Die Meisteringer von Nürnberg, disc two to Tannhäuser and Lohengrin, disc three to Tristan und Isolde, Parsifal, Das Rheingold and Die Walküre and disc four to more from Die Walküre, plus Siegfried and Götterdämmerung. No texts and translations, but detailed information on the recordings and biographical notes on all the singers.

With a few exceptions (Birgit Nilsson and Hans Hotter in Wie aus der Ferne from Der fliegende Holländer recorded in 1957, Lotte Lehmann singing Euch Lüften from Lohengrin in 1948) all these Wagnerian excerpts were recorded in a relatively short period of time between 1927 and 1942; a mere fifteen years, with the majority taken from the 1930s. It rather puts paid to the lie that, when comparing singers of today to those of the past, people are drawing from a much greater time period. How many singers active between 2004 and today can compare with the illustrious voices we hear on these discs?

Only Marta Fuchs, singing Senta’s ballad in 1940 gave me limited pleasure, especially when set next to ELisabeth Rethberg’s 1930 account which follows. There are some famous names here of course, like Frida Leider, Kirsten Flagstad, Lauritz Melchior, Friedrich Schorr, Alexander Kipnis, Meta Seinemeyer and Elisabeth Rethberg, but some of the less well known names are still startlingly good, for instance Florence Easton and Walter Widdop gloriously ringing and firm toned as Brünnhlide and Siegfried in the Prelude from Götterämmerung. The warm voiced Marjorie Lawrence’s career was mostly confined to France and it is in French that she sings a wonderfully malevolent Ortrud, with Martial Singher as Telramund. Though she also sang other mezzo roles, like Brangäne, she is a superb Brünnhilde in both Die Walküre and Götterdämmerung, again in French, singing with rich, beautiful, unforced splendour throughout her range. Her Immolation scene is quite one of the best I have heard.

There are other fine examples of Wagner in the vernacular. Again in French we have Arthur Endrèze as the Dutchman, Georges Thill and Germaine Martinelli as Walther and Eva and Germaine Lubin as Brünnhilde, and in Italian we have Aureliano Pertile (Lohengrin’s Nun sei bedankt) and Hina Spani (Elsa’s Euch Lüften).

There are some well known names among the conductors too, like Leopold Ludwig, Albert Coates, Sir John Barbirolli, Sir Thomas Beecham, Eugène Bigot, Rudolf Moralt and Leo Blech etc and indeed there is hardly a track that doesn’t have some interest.

Only the 1957 Holländer duet is in good stereo sound (Nilsson’s top notes bursting forth from the speakers like laser beams) but few allowances need to be made for the recorded sound, and one’s ears quickly adust.

Anyone with an interest in Wagner and/or singing needs to have this set in their collection. Both as a historic document and a source of great listening pleasure, it is absolutely essential.