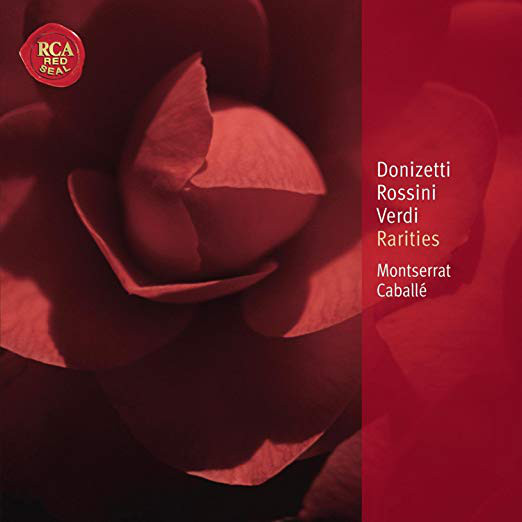 These two discs bring together the three LPs of bel canto Rarities Montserrat Caballé recorded shortly after she rocketed to stardom singing Lucrezia in Lucrezia Borgia at Carnegie Hall in 1965, a last minute replacement for an ailing Marilyn Horne. Each record was devoted to a different composer. The first two, Rossini and early Verdi, were recorded in Italy in 1967 with the RCA Italiana Chorus and Orchestra and the Donizetti with the London Symphony Orchestra and Ambrosian Opera Chorus in 1969. Carlo Felice Cillario was the conductor for the Rossini and Donizetti, Anton Guadagno for the Verdi and the luxury presentation included other singers in the various comprimario roles.

The material was even rarer back then than it is now as vary few of the works represented had ever been recorded, Caballé herself being one of the singers who spearheaded the bel canto revival that occurred after Callas had opened the doors to this repertoire in the previous decade.

These were the years of Caballé’s absolute peak and the voice is in superb condition, without a trace of the hardness that coud afflict her loud high notes in later years. Her breath control is prodigious, but she doesn’t over-exploit her fabulous high pianissimi, which she tended to do in later years, and her singing has an energy and attack which you might find surprising if you only know her from her later recordings, when she tended to slow everything down until it practically came to a halt. If she has a fault, it is that her trills are a little sketchy and occasionally one hears the slight suspicion of an aspirate, but the singing is surpassingly beautiful throughout its range, her legato excellent and the voice even from top to bottom. Characterisation might not be her strong point, but she is always alive to the dramatic situation and her singing is both involved and involving.

The arias on each disc are well chosen and the whole enterprise exudes class. I really can’t think of any singer today who could match her in this repertoire, maybe DiDonato in the Rossini and Donizetti, though she lacks Caballé’s arrestingly beautiful sound. As for Verdi, well we do seem to be experiencing a dearth of good Verdi singers today.

These two discs are a superb memento of a great singer at the height of her powers and should be in the collection of any vocal connoisseur. This particular release comes with full notes, texts and translations which are hardly to be taken for granted these days. Highly recommended.