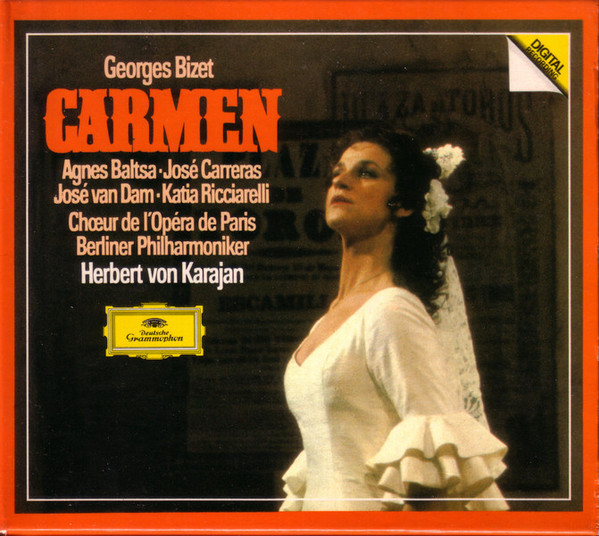 I saw Baltsa and Carreras in Carmen at Covent Garden shortly before this set was issued, and it remains one of the most thrilling performances (of anything) I’ve ever seen. Consequently I was very excited when this set was issued and snapped it up immediately.

Unfortunately, it proved something of a disappointment, the fault for which must lie squarely on Karajan’s shoulders. By this time measured tempi were becoming the norm for him, and it is evident how much he loves this score, but he rather loves it to death. For all the beautiful playing of the Berlin Philharmonic Orchestra, it lacks completely the wit and elegance of Beecham, or the swift visceral excitement of Prêtre.

Having taken the decision to record the version with spoken dialogue, it seems totally perverse to then use actors to speak it. They sound nothing like their singing counterparts and are recorded in a totally different acoustic, which makes it hard to become involved when the differences are so profound. It’s like listening to two different productions at the same time, and does the most harm to Baltsa and Carreras, who were so involving and communicative live at Covent Garden. Indeed neither of them really settles down to a real performance until the final duet, which is thrillingly powerful, as it should be.

What on earth prompted Karajan to think that Ricciarelli, a singer I often admire could be perfect as both Micaëla and Turandot, which she also recorded with him? She is suited to neither, whereas Barbara Hendricks, who had a particular affinity for French music, and who sings a wonderful Liu on that Turandot he recorded the previous year would have been perfect.

Van Dam is a fine Escamillo, as he was for Solti and there are some good performances among the supporting roles, but it just doesn’t add up to a convincing whole.

I keep the recording for the contributions of Baltsa and Carreras, and often listen to the final duet, but listening to the whole recording is a curiously frustrating experience, and I mostly longed to be back chez Callas, Gedda and Prêtre, which remains my favourite recording of the opera, for all that it uses the now discredited Guiraud recitatives.