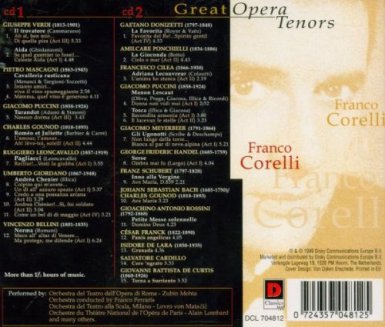 This two-disc compilation is drawn from the EMI catalogue and includes arias taken both from complete sets and recital discs.

People often go misty-eyed at the mere mention of Franco Corelli and he still inspires a huge following among opera lovers. For many he can do no wrong, and certianly the voice was a magnificent one, unique and no doubt a God-given gift. For me it’s more often a case of (to paraphrase the song from A Chorus Line) voice ten, artistry three. Not always, I hasten to add, and, if the performances on this set are anything to go by, he did respond to a strong hand at the helm. Predictably the best of them tend to be taken from complete sets, particularly those conducted by Zubin Mehta (Celeste Aida), Lovro von Matacic (Vesti la giubba) and Tullio Serafin (Pollione’s Meco all’altar di Venere from the second Callas Norma), which is arguably the best of all).

These are all on Disc One, where elsewhere there is just too much can belto sobbing. Manrico’s Ah si, ben mio, from the Schippers complete set, is delivered at a relentless forte (why not his stunning Di qella pira, I wonder?), as are the excerpts from the Santini recording of Andrea Chénier. Worst of all is the graceless, over-loud version of Roméo’s Ah, lève-toi, soleil, sung in execrable French. Listen to this and then to Bjørling, Kraus, Gedda or Alagna to hear how beautifully poetic the aria can sound.

Disc 2 has even less to commend it, I’m afraid. The best performances are taken from a recital record with an unknown orchestra under one, Franco Ferraris. Cavaradossi’s Recondita armonia lacks poetry, but E lucevan le stelle is much better, though he rather ruins the final measures with an excess of sobbing. Cielo e mar is also a fine, sensitive performance, with the added bonus of those gloriously free and ringing top notes.
The less said about some of the other items though, the better. After the operatic arias, we are treated (I’m not sure that is the correct word) to a selection from, presumably, a record of sacred arias, all in absolutey ghastly arrangements. Handel’s ubiquitous Largo from Semele is mangled almost beyond recognition, the Schubert and Bach/Gounod Ave Marias sung through a sort of treacle soup, and Rossini’s Domine Deus from the Petite Messe Solenelle bludgeoned to death. Franck’s Panis angelicus, taken, by the looks of things, from another album, doesn’t fare much better, nor, surprisngly does Lara’s Granada from the same album. Not entirely Corelli’s fault, as the arrangement is quite possibly the most ghastly I’ve ever heard, the tempo pulled around so much the piece loses any sense of flow. What price Wunderlich’s gloriously ebullient and sunny version for DG? Corelli sounds plain angry, but who can blame him when the accompanment is so awful?.

Fortunately the final two items somewhat redeem this sorry mess. The arrangements might not be much better, but in Cardillo’s Core ‘ngrato and De Curtis’s Torna a Sorriento, one just basks in the Mediterranean warmth of Corelli’s glorious tenor. It is moments like these that remind us of why we listen to him.