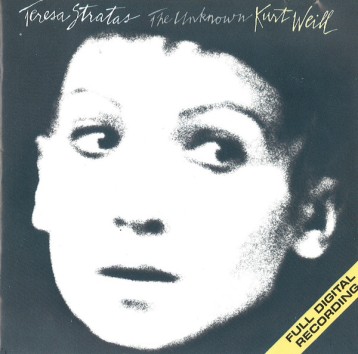 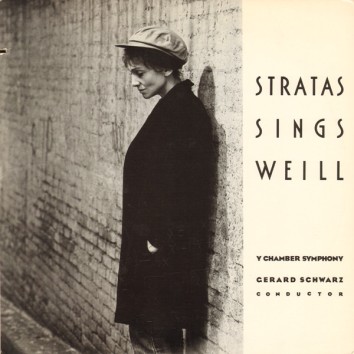 It was in 1979 that Kurt Weill’s widow, Lotte Lenya, saw Stratas singing the role of Jenny in The Rise and Fall of the City of Mahoganny. Knocked out by Stratas’s performance, she called her her “dream Jenny”, and afterwards she wrote to her, “nobody can sing Weill’s music better than you do,” and offered her a number of unpublished songs that she had closely guarded since Weill’s death in 1950.

The result was the first of these two discs, recorded in 1981, in which Stratas sings a collection of songs to piano accompaniment by Richard Woitach. Unfortunately, for the CD release, Nonesuch omitted the lyrics and translations that were included with the original LP, and what notes that remain are in minuscule print, almost too small to read without a magnifying glass. This seems little short of a crime, given Stratas’s vividly dramatic performances. Even without the aid of translations you can get a gist of their meaning, but how much more satisfying the disc would be be if we knew exactly what she was singing.You might be able to find texts and translations of some of them by scouring the internet, but it’s a long and arduous task.

Most people had no doubt got used to Lenya singing Weill’s songs in her gravelly baritone, but, as Lenya herself pointed out, her voice dropped over the years, and Stratas was performing them in the original keys. That said, most of these originally written for cabaret, had hardly ever been performed since and were here receiving their first recordings, though they are much better known now, and Weill selections have appeared from artists as diverse as Anne-Sophie von Otter and Ute Lemper.

Teresa Stratas was 54 at the time of the first recording. She had made her professional debut at the age of 20, joining the Met company the following year (1959), becoming a Met favourite until her final performance there in 1995 (in the role of Jenny in The Rise and Fall of the City of Mahoganny). The voice can be termed useful rather than beautiful, and, though a diminutive figure, she had a powerful stage presence, great personal beauty and was a superb actress. This might explain why she made comparatively few recordings, the most famous probably being Pierre Boulez’s recording of the completed Lulu, a role she had made her own in the Paris premiere. Beautiful or not, it was the perfect instrument for Weill’s songs, which rely on expression rather than beauty of tone.

Favourites for me here are the two settings of the same melody, one French, one German Wie lange noch and Je ne t’aime pas, the two Propaganda Songs Buddy on the Night Shift and Schikelgruber, and the glorious Youkali. Though the second disc is enlivened by the orchestral accompaniments, I have a special affection for the more intimate piano settings.

This second disc appeared four years later, and is more far reaching, though much of the material was more well known. The Y Chamber Orchestra under Gerard Schwarz has an undeniable of a theatre orchestra about it, which is perfect for the material. The songs are taken from Broadway musicals, and both German and French theatre works. Texts and translations are at least included, though print is again minuscule.

Stratas’s range is formidable. Though capable of the “Brechtian bark” we are probably more used to, it is bound into the fabric of her performance, as is the full operatic soprano at key moments. Consequently not only do we get the full meaning of the lyrics, but the lyricism of Weill’s writing is revealed to a much greater extent. Take the most famous song on the album, Surabaya Johnny, which emerges almost as a mini psycho-drama for solo performer. Her French and German are both impeccable, her command of the Broadway idiom just about perfect (a few years later she was to record the role of Julie in John McGlinn’s first ever complete recording of Jerome Kern’s Showboat). One of the most glorious performances is of Lonely house from Street Scene, which is swirlingly lyrical with an aching loneliness.

Both discs are an absolute must.